I rarely take snap shots of the different stages of my work, but my work on Mermaids is an exception. It is a visual translation of a short story by Richard Van Camp. There were no panel break downs and Richard is very trusting of my skills—and the comic scripts that I’ve seen of his have been very open to the creativity of the artist, for good or bad. My only restriction was that this 3917 word story had to be contained within ten comic pages: that was the tricky part. There was so much that I wanted to include from the story—Torchy and Sfen’s relationship, their early years, more Snowbird, more Stephanie— but the page count was immutable.

I took snaps shots of the different stages of the first page and sent them into Richard for a few reasons. Firstly, I was honestly very happy with the way the panels were coming together (the first panel made me feel I was invoking my 19 year old self, during my Frank Miller phase). Secondly, I’m a bit of a narcissist, and Richard is highly encouraging and enthusiastic, so I wanted to hear how awesome the image was. Lastly, the problem I find with such open scripts is that I feel I’m missing something. So, I send regular updates so that my mistakes or details can be caught quickly.

I am excited to work on this adaptation of Richard’s story. Richard and I will be working together again in the very near future on a full length graphic novel, Blanket of Butterflies. Lost Samurai swords, yakuza, gangs in NWT and Hiroshima!

Lots of artist use non-photo blue pencils, but I haven’t used one in over a decade. Just not my cup of tea. Besides, with scanners these days, they seem to pick up the blue lines anyways. I’m trying to tighten up my pencils, even though I ink my own work, so that I have fewer mistakes, and to help me get a clearer picture. I use 2H Staedtler drafting pencils. 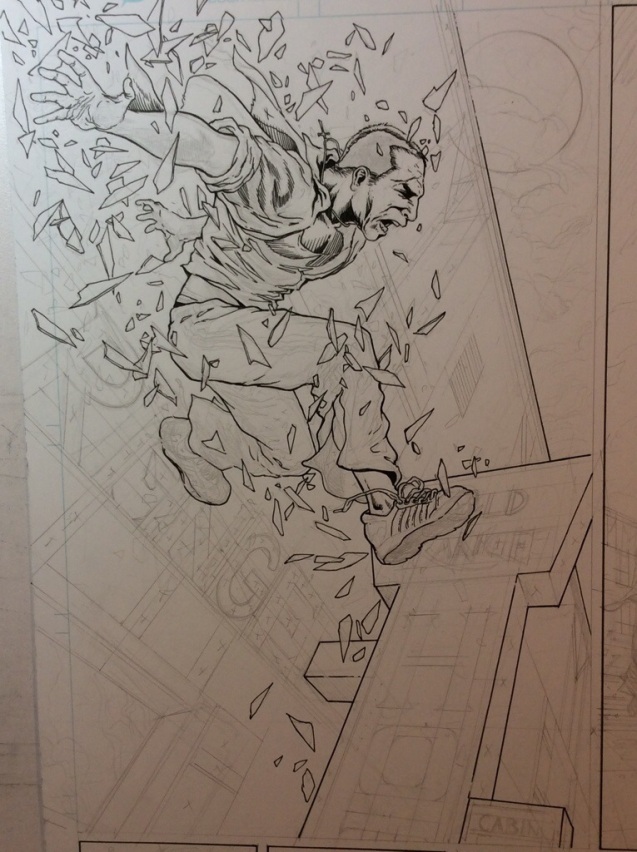 The start of inking. My wife noted that his arm “looked funny” in the pencil phase and I agreed though I couldn’t quite figure why. I took a picture if myself and got a better idea of how it would look. While I can imagine many things and put it to paper, nothing beats having physical reference. 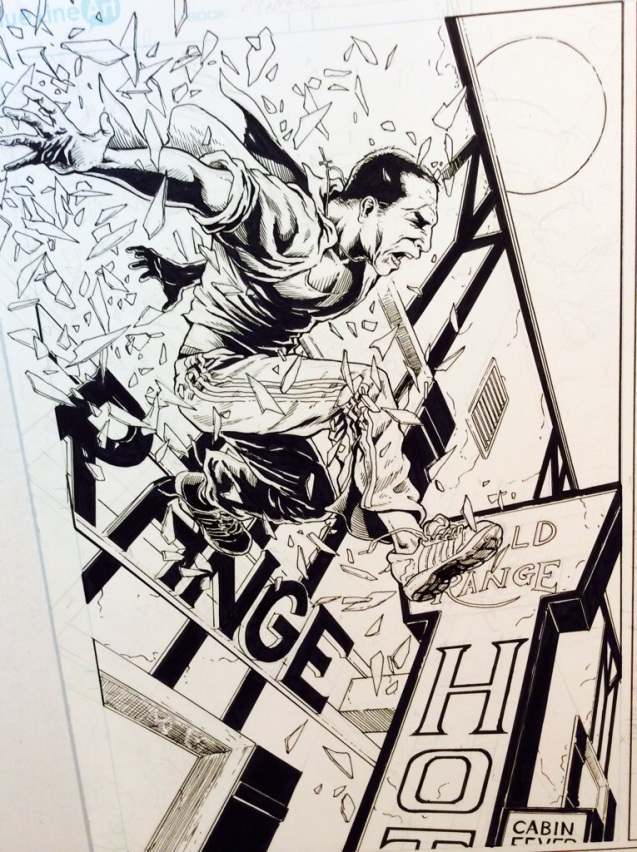 And nearly finished inks. I later did some details in the moon and I turned the sky black in the computer. Most of the time I will fill in black areas on the computer, but I used a Prismacolor brush pen. I may have to go back to computer filling, as I need to speed things up a bit.

I’m all for Micron Pens now for inking. Previously I used Rapidiograph refillable technical pens. I’ve come to like the clean, uniform lines. Using a nib pissed me off for awhile; the nib would just not work, then spray ink everywhere. And while I probably am spending too much money replacing the Micron pens, I sometimes went for weeks without inking, and the Rapidiograph pen would get clogged.

I found the thumbnails for this page. Nowadays my thumbnails are about 1″x2″, and I still like to cram details I to them. In this case I went with the second version (which is usually the case with all of my thumbnails). Other details changed the design as I found reference for the hotel. This is based on the Gold Range Hotel in Yellowknife, NWT. In the story it was only referred to as the Range Hotel. Not sure if there was a difference, but it had the look I had in mind.